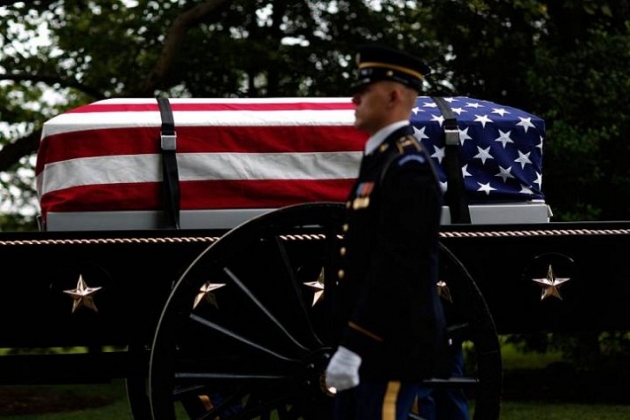 North Korea has returned remains believed to be of US troops killed during the Korean War, the latest move in the cautious diplomacy between Washington and Pyongyang.

Troops formed an honour guard as the plane carrying the remains touched down at a US base in South Korea.

Relatives have waited years to retrieve the remains of their loved ones.

The repatriation was agreed at the June summit between US President Donald Trump and North Korea’s Kim Jong-un.

The summit in Singapore, where the leaders agreed to work towards the “complete denuclearisation of the Korean Peninsula”, has been criticised for a lack of details on when or how Pyongyang would renounce nuclear weapons.

But the return of US remains was one of four points actually listed in that June declaration and comes on the 65th anniversary of the signing of the armistice that ended the 1950-1953 Korean War.

It is believed that 55 soldiers have been returned this time but their remains will need to be forensically tested to ensure they are indeed slain US troops – it’s possible that the identification process could take years.

Why are US remains in North Korea?

More than 326,000 Americans fought alongside soldiers from South Korea and a UN coalition during the war to support the South against the Communist North.

Thousands of US military personnel from the Korean war remain unaccounted for and most of them – about 5,300 – were lost in what is now North Korea.

The missing US soldiers are among around 33,000 coalition troops still unaccounted for.

The remains are believed to be located at:

Between 1990 and 2005, 229 sets were returned, but this halted as relations deteriorated with the development of North Korea’s nuclear ambitions.