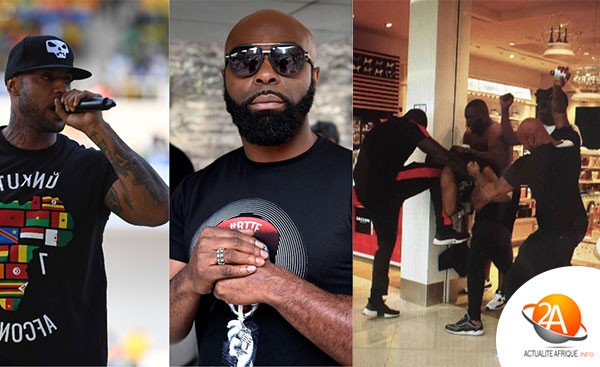 A mass-brawl between two French rappers and their clans in front of shocked holidaymakers at Orly airport in Paris on Wednesday led to flights being delayed and forced police to close part of the terminal.

The fight took place at at around 3pm in the shopping area of Hall 1 between rappers Booba and rival Kaaris and their members of their two entourages.

Videos posted on Twitter by witnesses showed around a dozen men launching repeated kicks and punches at each other while shocked holidaymakers flee to get out of their way.

The two rappers, Booba, dressed in a black T-shirt and Kaaris, dressed in grey, who have long been enemies, can be seen exchanging several punches. The fight spilled into a duty free perfume shop where several men can be seen punching another man who was cornered.

One of the men appears to be wielding a bottle of perfume as he repeatedly throws punches.

The brawl was only broken up when police and airport security arrived.

Airport authorities later announced that the men were being held by police and that Hall 1 was temporarily closed.

Passengers were warned to expect to delays to their flights.

Both rappers were heading to Barcelona where they were due to play live at two night different nightclubs just a stone's throw away from each other.

But those concerts are unlikely to go ahead given that the two rappers were arrested and taken into custody.

In all police made 13 arrests. Officers were studying CCTV to determine the role of each the arrested men.