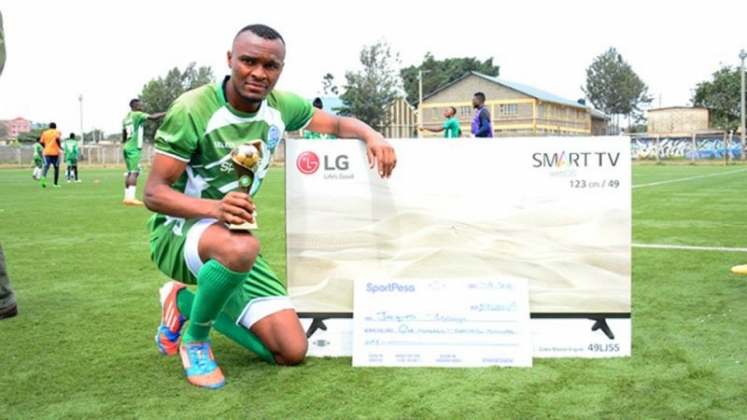 Gor Mahia forward Jacques Tuyisenge is the SportPesa/LG/SJAK Player of the Month for June.

Tuyisenge, who has scored five goals in the month that K’Ogalo won all their five matches on a trot.

The Rwanda international was awarded Sh100 000, a trophy and a 49-inch LG TV courtesy of sponsors at Camp Toyoyo on Thursday.
Following another outstanding month that saw them pull clear of their closest challengers Sofapaka, the team got an extra Sh50,000 for their contribution to the player’s August exploits.

The team got an extra Sh50,000 for their contribution to the player’s June’s exploits.

En route to winning the award, the 27-year-old scored a brace against Nzoia Sugar FC and a goal each against Wazito FC, Ulinzi Stars, Posta Rangers and the winner against SoNy Sugar.

“I’m so happy to have been recognized with this award. I have for a long time hoped to win it and it is great to finally get it. I dedicate it to my teammates who helped me achieve it. I can’t score without their input and they have really been great. Actually the team Gor Mahia functions because we are a unit. We play as a team and that is why we are this strong.” the Rwandan forward said

Tuyisenge also hopes to track the absent Elvis Rupia’s goal count and clinch the golden boot this year. He was a runner-up for the gong last year and is the leading contender after Rupia’s departure to Zambia.

“I can win the golden boot this year. As a striker whenever i leave a football pitch without scoring it hurts me so I want keep scoring and exceed the current leader who is not playing here anymore,” he added

Tuyisenge who had a slow start to the season was shouldered with the responsibility of taking over the scoring mantle from Meddie Kagere, now at Simba, did not disappoint and his five goals clearly showed that he has what it takes to help the 16 time Kenya champions to retaining the Sportpesa Premier League crown.

Gor Mahia collected maximum points over Wazito FC, Nzoia Sugar, Ulinzi Stars, Posta Rangers and SoNy Sugar. They are now 12 points clear on the log and are still active in the CAF Confederation Cup and the Sportpesa FKF Shield Tournament.