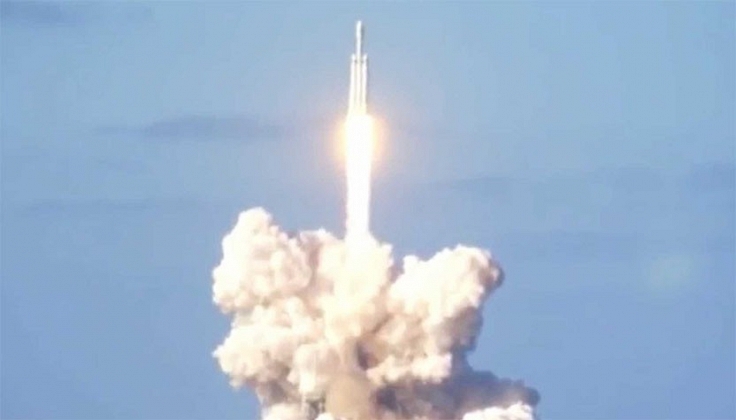 The world’s most powerful new space rocket blasted into the heavens above Florida’s east coast on Tuesday afternoon on a trailblazing deep-space mission that Elon Musk, founder of the private aerospace company SpaceX, believes could spell “game over” for his commercial spaceflight rivals.

The Falcon Heavy, which will provide the United States a heavy-lift capability in space not seen since the Saturn V rockets of the Apollo era, made a flawless ascent through clear blue skies, with at least two of its three reusable boosters returning safely to earth.

The spectacular, flame-heavy launch was watched by an estimated half-million spectators who packed the beaches and other key vantage points around Florida’s space coast for the biggest fireworks show since the retirement of Nasa’s space shuttle fleet in 2011.

Pictures of the car heading into space with the Earth below gave the triumphant launch a surreal quality. From there, it will journey on through a six-month, 400m-kilometre trip to a solar orbit, for more than a billion years.

Musk hopes the Falcon Heavy will help with interplanetary exploration and assist the mission of Nasa, the American space agency, as it works towards a return to the moon for the first time since 1972, and eventually landing humans on Mars before the middle of the century.

“Falcon Heavy heading to space on our test flight, building on the history of Saturn V/Apollo and returning launchpad 39A to interplanetary missions,” a SpaceX announcer said as the rocket lifted off, referring to the historic launchpad at the Kennedy Space Centre from which the first manned moon mission took flight in July 1969.

Musk, the billionaire founder and lead designer of SpaceX, who first announced plans for a heavy-lift rocket in 2011 and constructed the Falcon Heavy by strapping together three boosters from the company’s smaller but proven Falcon 9 cargo rockets, had downplayed expectations of a successful launch.

On Monday, he had estimated Falcon’s chances at about 50-50, and said he feared a launchpad-destroying explosion similar to the Falcon 9 fireball that created extensive damage in September 2016.

But in the same conference call with reporters, Musk said that a problem-free launch of Falcon Heavy would be a game-changer for SpaceX and other commercial spaceflight companies vying for contracts from Nasa, the US military and private enterprise.

Recycling rockets, Musk said, keeps the cost of a Falcon heavy launch at about $90m, compared with $435m for the launch of a Delta IV Heavy operated by the United Launch Alliance. The Falcon, Musk added, also possessed almost twice the payload capacity of the Delta.

“If we are successful, it’s game over for other operators of heavy-lift rockets,” Musk said. “It’s like where one aircraft company has reusable aircraft and all the other aircraft companies had aircraft that were single use, and you’d sort of parachute out at your destination and the plane would crash land somewhere. Crazy at it sounds, that’s how the rocket business works.”

There had been a carnival atmosphere at the Kennedy Space Centre through the day, with Apollo astronaut Buzz Aldrin, 88, the second man to walk on the moon after Neil Armstrong, as a guest of honour.

Spectators who paid $195 each for a ticket packed the bleachers at the Saturn V visitor centre and had a clear view of the launchpad across the Banana river just 3.9 miles away. Parents kept children out of school, and other families travelled great distances to witness the launch.

Watch the videos below: